Everything YOU NEED TO KNOW ABOUT Central Banking #EndTheFed

Pieces of an excerpt from “In a Manner of Stately Dress”, in Veritas Libertas: The Libertarian Papers, by Caleb Wright

The Federal Reserve System (the Fed), the central bank of the United States, is perhaps the most powerful monetary authority in the world ever since the Breton Woods agreement. It was founded in 1913 following a series of several deliberately-planned bank runs. Prior to its founding via the Federal Reserve Act, prominent representatives of international banking and financial giants, such as the houses of Rockefeller, Warburg, and Rothschild, met with Rhode Island Senator Nelson Aldrich at a private club on Jekyll Island in Georgia to devise a secretive scheme founding a central bank to control the country’s assets. Ideally, such a system would also control and have a monopoly over interest rates and the creation of currency, along with a centralized check-clearing system. The men present at this meeting are said to have comprised one fourth of the entire world’s wealth. In such meeting, the foundations of a new central bank would be laid, in which a system that acted like it was “decentralized” inherently centralized the entire system of government economic regulation, and control over the currency itself.

Of course, it doesn’t take a rocket scientist to figure out that this is all a scam.

How the Fed really works:

The government needs money. They do not get their money via taxation. They get it through a series of bonds issued by Treasury; these include T-bonds, T-bills, T-notes, and TSTRIPS. These bonds are then purchased by the banks and the banks sell these bonds to the Fed (which they own), in exchange for newly created currency. This is how “base money” springs into existence. The banks then use that newly printed currency to purchase more bonds, and so newer currency is created, and so the process is repeated.

It all starts when the government, instead of raising tax rates (an unpopular decision), decides to rely upon the inflation produced by monetary policy in order to raise extra funds. This acts as a “stealth tax”, as the prices in the economy act a sponge on the monetary policy of the Fed. This also enables the Fed, and the banks who own it, to control prices and decide winners and losers.

The banks then take the bonds purchased from the Treasury to the Federal Reserve and exchange those bonds for brand new, printed currency according to the Federal Funds Rate (The Bank of England works similar but has a direct-regulatory model).The banks take this currency and purchase more treasury bonds at the next auction, enabling the banks to print unlimited amounts of currency with “inflation-protected” bonds, and they repeat this cycle over and over again.

The bond payments do not stop; they are perpetual. This step is called “Open Market Operations”. It is essentially a legalized ponzi scheme. This is not only where almost all paper money comes from, this is also where all national debts come from. Last but not least, since the banks hold this new currency first, they are the “first buyers”, meaning they get the deflation while the economy receives the inflation, since that cash has not made its circulatory impact upon prices prior to the bank’s spending of it. Every step of the way, the bankers make a profit.

The government, which receives all of this brand new, circulated cash, then spends the numbers. They spend it on social programs, entitlements, infrastructure, and war. The perpetuity of the bonds guarantees liquidity to the state while the monopoly on currency insures the state’s assets. Every dollar held by government maintains its value via the usage of coercive force. But here’s the catch: The government spends these numbers in the form of checks. Where are these checks taken? Back to the banks, the same banks that supplied the numbers in the first place. The banks purposefully circulate the newly printed cash (which they print) through the government knowing that it will end up right back in their hands. Government employees deposit their paychecks into banks, defense contractors have bank accounts and bank investments, people take their social security checks to the bank, and so on and so forth. The banks even have algorithmic computers and calculating machines that can predict the exact amount of currency that will be circulated through the government and how much will end up in their hands.

You thought that was a total swindle? Just wait until you hear this.

The banks, once they get the numbers from the deposited government cash, then multiply these numbers via a process called “Fractional Reserve Lending”. Fed rules state that the banks must hold 10% of all depositors’ cash as reserves (which are held in the Fed, making this a ponzi scheme, too), and then loan the rest out. This is called “vault cash”; however, it isn’treally cash. Instead, the banks leave their own IOU’s (pretty flowery leaflets with their name on it) in the vaults and loan the entirety of the cash out. The Federal Reserve purchases these IOU’s too along with government securities, but since the Fed draws upon a Treasury account without a single dollar in it, they are effectively printing new cash. All Fed purchases of bank bonds (from the same banks that own the Fed) are newly printed currency, and most of it is electronic.

Instead of loaning 90% of cash out and keeping 10% in reserves, 100% is loaned out and the force of government protects and guarantees their interest and value. In reality, every dollar that goes through the banking system is immediately lent out. This is where 94-96% of all currency comes from. The banks own the printing press, and they print as much as they want; they then circulate this cash out by various means, including credit cards, which are then re-deposited back into other banks. The banks then relend them, and they are then re-deposited and relent, re-deposited and relent (as Mike Maloney would say), over and over again. After a while, for every $100 that was printedoriginally by the Fed, $10,000 exists in a matter of minutes. Every single time that a dollar is spent, ten cents are created.

It shouldn’t occur as a coincidence that the same year in which the Federal Reserve Act was passed into law was the same year that the Income Tax was enshrined in the United States Constitution as the Sixteenth Amendment. The income tax keeps this hyperinflation in check, meaning that the only thing protecting the dollar’s value is the usage of coercive force. This further allows the banks to control prices, whilst they print as much currency as they wish knowing that taxation will soak it up. The interest rates are manipulated after this “soaking” to allow the currency to change hands.

While the Federal Reserve pretends that the interest rates take into account the consumer price index and that inflation is consistent with the rise in prices, the truth is that the prices are inherently controlled by the Fed through this mechanism. The real truth is that the inflation rate is not consistent with the consumer price index. For every dollar that is spent every second, ten cents are created, so the inflation rate is somewhere around 10% or possibly 35% yearly, because taxation acts as a sponge to soak up these newly created funds, which prevents this hyperinflation from being picked up by the economy.

The banks multiply the numbers, and the citizenry’s numbers gettaxed. These tax dollars are immediately paid straight back to the banks who printed them.

Are you seeing the scam now?

Now we get to the nature of the currency itself. Since the currency itself is immediately tied to debt (because that is how it is printed, by selling bonds for newly created cash), this results in a build-up of bonds in foreign banks and central banking institutions. This buildup allows the Fed to fix the currency at any given rate and even destroy some bonds; however, these bonds carry interest. This is yet another scam. Every single dollar in existence holds unpaid interest on it, so it’s just like an IOU, and the only way to pay back that interest is to create (by loaning) more dollars, which creates more interest, which creates more dollars and more interest, which repeats this cycle. There will never be enough currency in existence to pay back the debt. Since all of this printing creates public debt, that means the national debt is privately created and publicly paid for. When politicians talk of a “debt ceiling”, this is a total façade; the debt ceiling is continually raised because they will continue to keep kicking this can down the road, knowing that the system will one day come to an end.

This problem became gigantic as soon as the United States left the gold-backed monetary system in the early 1970’s. By using and spending currency, not only is the citizenry allowing for more of it to be created through fractional reserve lending, but also they are enabling the bank’s grip upon the populous to be strengthened.

Who would know that state-sanctioned slavery through debt could be profitable? After the process is done, 94% of the Federal Reserve’s profits are transferred to the Treasury for destruction and recirculation through Congress. The other 6% is given to—you guessed it—the banks, as a “gracious dividend” for their stock ownership of the system.

But of course, your elected officials will keep blaming capitalism for this nonsense, and the gullible American public will continue to eat it all up.

Congrats! You just learned that everything about the entire United States Economy is a centrally planned, trillion-dollar ponzi scheme enforced by a government-sponsored private banking cartel, and it has been this way for the past 107 years. 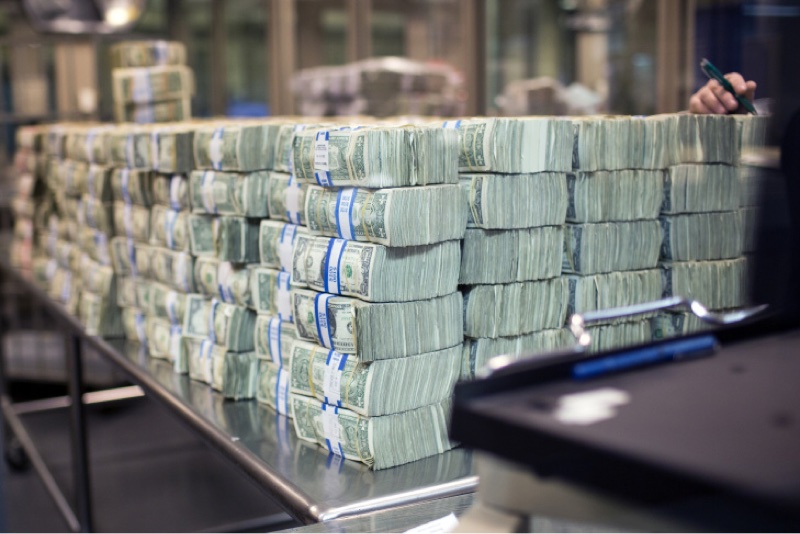 The Masista Era, Start and Fall